VyprVPN Review: A Look On Its Features and Performance 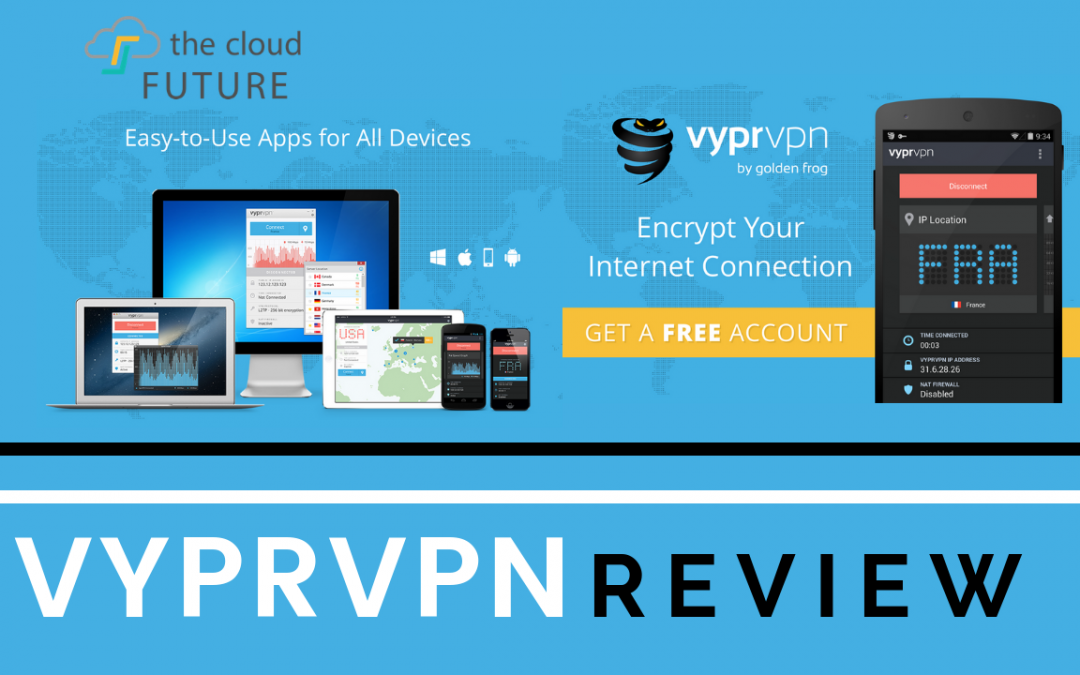 When it comes to protecting your computer, it’s hard to go wrong with installing an antivirus software. However, an antivirus won’t stop anyone from spying on your internet traffic. Today, we’re going to take an in-depth look at Golden Frog’s VyprVPN. For this VyprVPN review, we’ll find out if this service can match its bold claim of being the world’s most powerful VPN.

A VPN provides the much-needed protection where your computer navigates the world wide web. It sends the web traffic from your computer to the internet through a secure, impenetrable tunnel.

If you are looking to secure your web traffic, you’ve come to the right place.

VyprVPN Review: What Is VyprVPN?

Back in 2010, Golden Frog is a global internet privacy and security solutions company and was founded by Carolyn and Ron Yokubaitis. The company offers a wide range of services from VyprVPN to optimized gaming network Outfox.

It’s interesting to know that the VPN service is actually based in Switzerland which is a country known for its strong privacy policies. This seems to indicate that Golden Frog has a strong dedication to digital privacy and an open internet.

Before any confusion ensues, the Golden Frog company is actually based in the United States. With that said, it’s fair to assume that at least some of VyprVPN fall into U.S. jurisdiction.

Golden Frog’s VyprVPN is a virtual private network that focuses on speed with 70+ server locations which are nothing short of impressive. The service also supports a wide range of devices and operating systems and has the reputation of being particularly good for U.S. endpoints.

So is VyprVPN any good? We’re about to take an in-depth look at the features of this virtual private network and see if it’s worth your time and money.

As mentioned, VyprVPN is known for its claim as the world’s fastest VPN service. On top of its speed, Golden Frog also provides customers with a variety of features.

At a glance, here are some of the most notable features of VyprVPN:

Setting up VyprVPN is a rather quick and easy process. First, you have to create an account then you can launch the dashboard where all the information that you need to install the VPN is laid out to you. This includes the download links and installation guidelines.

These are the operating systems that are supported by VyprVPN:

After downloading and running the installation file, you will likely see some items that are added to your system. Don’t need to be alarmed as these are dependencies and network controllers that are used to run the application.

VyprVPN features an appealing interface which shows the chart of your network’s current download and upload speeds in real-time. Your current IP address is emphasized and there’s also a clear display of your VPN protocol and NAT firewall status.

At the top, you’ll see the “Connect: Fastest Server” button which does exactly that. However, you can configure which servers are your favorites and you can use the button to connect to them. You may also navigate to the Server tab and you can check out VPN’s network offerings in a separate window.

The client displays the location by name, continent, and speed. Typing on the search box will yield some suggestions or you can access your most frequently used locations from the Favorites.

Using a VPN means running it 24/7. Thus, the importance of the VPN’s performance can’t be understated. Below we did several tests to evaluate the performance of VyprVPN.

The network size of a VPN can make or break the service.

Fortunately, VyprVPN offers an excellent selection of 700 nodes that span across 70+ different locations with around 200,000+ shared IP addresses. All the continents are covered and most of the hotspots are located in North America, Europe, the Middle East, and Asia.

A neat thing about VyprVPN is that it owns its entire network of servers which just can’t be said with most VPNs. VyprVPN keeps everything in-house which adds another layer of security to their service.

It’s a fact that VPN servers will always be slower than an unsecured network.

Based on our tests, VyprVPN has passed with flying colors. What we like about the VyprVPN speed tests is that the results are quite the least variable. Connecting to the VPN allows us to consistently reach speeds that are around 85-95% of our unsecured speeds.

These types of results are quite unheard of when it comes to VPNs. Of course, your experience may still vary since speeds can vary from system to system along with other variables.

If we have to guess, these high speeds can be attributed to the VPN’s detailed encryption options. We tried both 256-bit OpenVPN and the 160-bit option and observed a significant difference between the two.

When it comes to VPNs, we tend to consider privacy policies and value over speeds. However, it definitely doesn’t hurt that VyprVPN is quite fast.

Below, we have taken a look at some of VyprVPN’s privacy features.

If you are looking for a VPN that will not make any logs, then this is not the product for you. VyprVPN is very open with its logging policies while other companies won’t be as clear. Below is the short version of Golden Frog’s logging policies:

As per Golden Frog, it’s worth noting that the information that is logged will only be stored for 30 days.

The default protocol and encryption level that are used by VyprVPN is 256-bit AES with OpenVPN. For many users, this particular combination provides the best balance of speed and security.

Squeezing more speed from your VPN is definitely possible by tinkering with some of the software options. It’s a good thing that VyprVPN provides a great deal of control over your protocols and encryptions. All of the security options can be found under the “Protocol” tab under options.

From the Protocol tab, you can choose between four encryption types, plus Golden Frog’s own proprietary technology:

These two proprietary technologies are the main selling points of the VyprVPN Premium version.

As mentioned, Chameleon is basically the stealth mode/cloaking mode of the VPN. This innovative feature takes encrypted packets and protects the metadata with another layer of encryption. This helps hide information like IP address and point of origin. This feature basically obfuscates your web traffic.

With Chameleon enabled, it’s basically impossible for an ISP to penetrate your traffic’s encrypted data packets. This is a great feature to have if you’re going to surf the web in a country with heavy censorship like China. Even government level firewalls will find it a challenge to stop Chameleon. This extra layer of encryption really does wonder for your internet freedom. Another great benefit of Chameleon is that it helps bypass ISP throttling.

VyprDNS is another proprietary technology by Golden Frog that helps ensure online privacy and combat censorship. By default, we have to rely on the ISP to provide DNS servers. The problem with this is that it gives them the ability to monitor our web traffic and censor some websites.

VyprDNS offsets that and even protects customers from potential cyber attacks and DNS filtering. It’s worth noting that this feature cannot be disabled.

Many of you are probably reading this VyprVPN review in order to find out if it’s a good match for Netflix and other streaming services.

Most streaming services like Netflix have been aggressive when it comes to blocking the use of VPNs. If you can’t guess it yet, VPNs are used to give someone a different location where the user can access exclusive content from another country.

When it comes to Netflix, VyprVPN has a fairly good access to Netflix, especially when you use U.S. servers. We have tried other locations like South America and Europe and unfortunately, we were greeted with the usual error messages. When we used the U.S. servers, we were able to make it work. Plus, we tried locations like Australia and Japan and they worked to some extent.

At the time of this writing, VyprVPN seems to be in a good standing when streaming Netflix. However, it has always been a cat and mouse game between streaming services and VPNs, so this could change anytime or as soon Netflix renews its IP filter list.

Golden Frog did a good job by providing an extensive knowledge base which is relatively easy to navigate. However, it’s so extensive that it can be a challenge to find exactly what you are looking for. With that said, you should be able to resolve your problem just by looking up the Help section and without getting in touch with customer support.

However, once you decide to use the company’s live chat, it all goes downhill. Maybe it’s just the time of the day but the chat support is not as responsive as we have liked. Plus, there were multiple occasions where the chat just disconnected.

Email is better but not by much. Most of our mundane questions are answered but it did take them many hours to reply to the mail after the ticket was received. While I won’t say the customer support is bad, it does pale in comparison to other VPN services. It could really use an improvement.

VyprVPN’s pricing plans are a little different than other VPNs. Instead of providing total access with flat prices, Vypr’s prices are based on subscription length.

Basically, there are two pricing tiers: standard and premium.

The standard is priced at $5.00 which is billed annually, so that’s $60. Alternatively, you can pay $9.95 if you prefer to use the service for a month. Standard can support up to 3 simultaneous connections and unlimited bandwidth.

On the other hand, Premium is billed annually at $6.67 per month which amounts to $80 per year. Premium supports up to 5 simultaneous connections, including everything the Standard offers, plus VyprVPN and Chameleon features.

Both plans come with a free 3-day trial.

Is VyprVPN Right for You?

For most people’s needs, VyprVPN is a top-notch VPN. It offers the most features and qualities that you want from a VPN provider. The client and app are both easy to use, the servers are fast, and has a pretty good privacy policy.

The only downside is the pricing. In my opinion, it’s slightly overpriced. However, one can argue that you are paying for quality here.

Hopefully, this VyprVPN review has helped you decide if this VPN is worth your time and money.